The Camden Town Group was a group of English Post-Impressionist artists active 1911-1913. They gathered frequently at the studio of painter Walter Sickert in the Camden Town area of London.

In 1908, critic Frank Rutter created the Allied Artists Association (AAA), a group separate from the Royal Academy artistic societies and modelled on the French Salon des Indépendants. Many of the artists who became the Camden Town Group exhibited with the AAA. 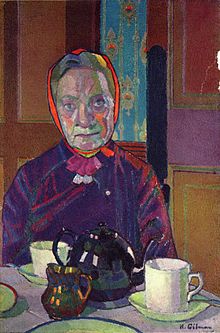 Influences include Vincent van Gogh and Paul Gauguin whose work can clearly be traced throughout this groups work. Their portrayal of much of London before and during World War I is historically interesting and artistically important. 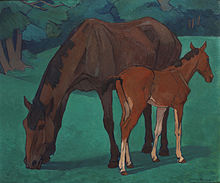 In the Cinema by Malcolm Drummond is noted for its claustrophobic feeling. It is an interesting foil to the work of Sickert who painted many rowdy music hall scenes, including Gallery of the Old Mogul (also depicting the viewers of a film). Sickert’s “Ennui” of 1914 is often considered the masterpiece of this group’s work, with its portrayal of boredom and apathy in the mould of Flaubert and others.

The group organized the exhibition of Cubist and Post-Impressionist paintings.

A major retrospective of the group’s works was held at Tate Britain in London in 2008. The show did not include eight of the members, among them Duncan Grant, J.D. Innes, Augustus John, Henry Lamb, Wyndham Lewis and J.B. Manson, who was, according to Wendy Baron, of “too little individual character”.